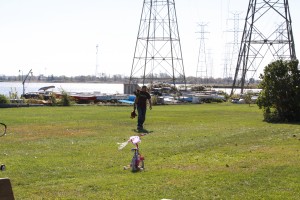 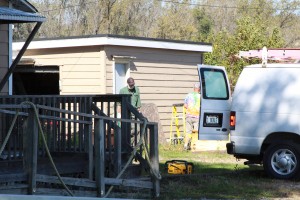 Rick and Mike installed new fascia on the garage.  Mike P. and Bill worked on cleaning out around the garage (amidst many booby traps, lol), Nick cut weeds around some club boats.

Nick, Tamara and Lynn worked on cleaning out underneath the middle tower.  A lot of bad wood was removed and cut up for firewood.  Barrels were moved out for storage with the other barrels.

Beneath the towers still need to be cleaned with everything that will be kept moved to neatly under the lakeside tower.  This tower will be enclosed with the white plastic fencing so as not to be visible.

Saturday the 17th was the Wake of the Season.  Turnout was great and the boat was a big success.  Thanks to Bill Smutzer for the boat building (Bill had to be out of town for the wake) and to Mike and Rick for setting up the fireworks.  Food and Spirits were fantastic.

The annual election was also held with the current Flag Officers retaining their positions and a new addition to the BOG.  Welcome Bill Kinney!

Thanks to Marge & George Drozd for a $50.00 contribution to the club.

Mike Geise donated a Memorial Award in Honor of Gordon Kinney’s long time service and dedication to Illiana Yacht Club.  Hopefully we will have the pleasure of Gordon’s company for many more years to come.